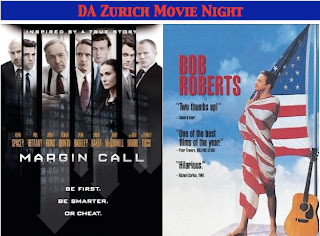 Let us know you are coming! RSVP to secretary@democrats.ch


On Friday March 9th, Democrats Abroad Zurich will be hosting a movie night. We'll be watching either ''Margin Call'' or ''Bob Roberts''. We'll take a vote at the event, and watch whichever movie the most people want to see! (Send your vote in early via Facebook.)

Here's a bit of information about each movie:
''Margin Call'' is set in the high-stakes world of the financial industry. It's an entangling thriller involving the key players at an investment firm during one perilous 24-hour period in the early stages of the 2008 financial crisis. When an entry-level analyst unlocks information that could prove to be the downfall of the firm, a roller-coaster ride ensues as decisions both financial and moral catapult the lives of all involved to the brink of disaster. J.C. Chandor's enthralling first feature is a stark and bravely authentic portrayal of the financial industry and its denizens as they confront the decisions that shape our global future.

''Bob Roberts'' is a 1992 film written and directed by Tim Robbins. It is a satirical mockumentary, chronicling the rise of Bob Roberts, a conservative politician who is a candidate for an upcoming United States Senate election. Roberts is well financed, due mainly to past business dealings, and is well known for his music, which presents conservative ideas with gusto.

We will also have snacks and drinks available for a small fee.
Additionally, there will be information and help available for voter registration.