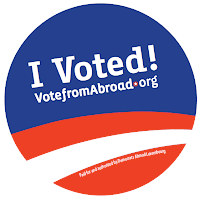 The excitement of the Democratic presidential nominating process will be coming to Switzerland during the first week of May.  This is the time when you can show your support by voting to once again have Barack Obama as the Democratic Nominee for President in 2012!

As Democrats Abroad is known in the Democratic Party as ''the 51st state'' you have the chance to cast your vote for Barack Obama in Switzerland:

At this same event, we also have the honor of electing our delegates to go to the Democratic National Convention in Charlotte, North Carolina, in September.  The delegates will represent us in nominating Barack Obama.  We have several Democrats Abroad Switzerland members who are candidates running to be delegates. Their names along with the full list of candidates will be announced soon.

As background, President Obama is not the official nominee of the party until the state delegates, including Democrats Abroad, have voted at the Convention in Charlotte.

If you can't attend the official primary event on May 3rd in Geneva, then you can vote in the presidential primary with an absentee ballot by mail, fax or email.

Americans, who are not yet registered as a Democrat Abroad, can do so at the May 3rd Democrats Abroad Primary event in Geneva and vote that same day.

We very much hope that you will participate in the Democrats Abroad Primary, and we would especially love to see you come in person to cast your ballot. For overseas voters, this is the only chance we will have this year to actually walk into a voting place and cast an in-person ballot. (See FAQ below for details.)

Answers to some frequently asked questions:

Why are we having a primary? Does President Obama have any opponents?

Barack Obama is the only candidate who is running in the Democrats Abroad Primary – although, per Democratic National Committee rules, voters also have the option of choosing an undeclared delegate, who would be able to make up their mind and cast their vote freely at the Convention in North Carolina.

However, Obama does not become the official nominee until the Convention, where he is elected by the delegates who represent you. It's through the Primary process that we choose who those delegates are. PLUS, a strong turnout in the Primary will show folks back home – in both parties and in the media – that Americans abroad are energized, want their voices to be heard on matters affecting them and their country, and want a Democratic President in the White House for the next four years.

I already voted by absentee ballot in my home state's primary. Am I still eligible to vote in the Democrats Abroad Primary?

In order to vote in our primary, you must be a member of Democrats Abroad – however, voters can choose to join at any point up to and including the date they cast their ballot and still be eligible to vote. If you have a friend or family member who would like to vote, please encourage them to join online ahead of time. It's quick and easy at: www.democratsabroad.org/join. Otherwise, they can join at a Primary site before casting their vote in person.

I can't attend a voting center in person, can I still vote?

Absolutely! We will be circulating information closer to the time that gives full details for how to cast a postal, email, or fax ballot – just keep checking your emails.

Do you have more questions? Email chair@democrats.ch and we will do our best to answer.

Would you like to help volunteer?  We need all the help we can get — drop us at a line at volunteer@democrats.ch and we'll put you in touch with the relevant people.